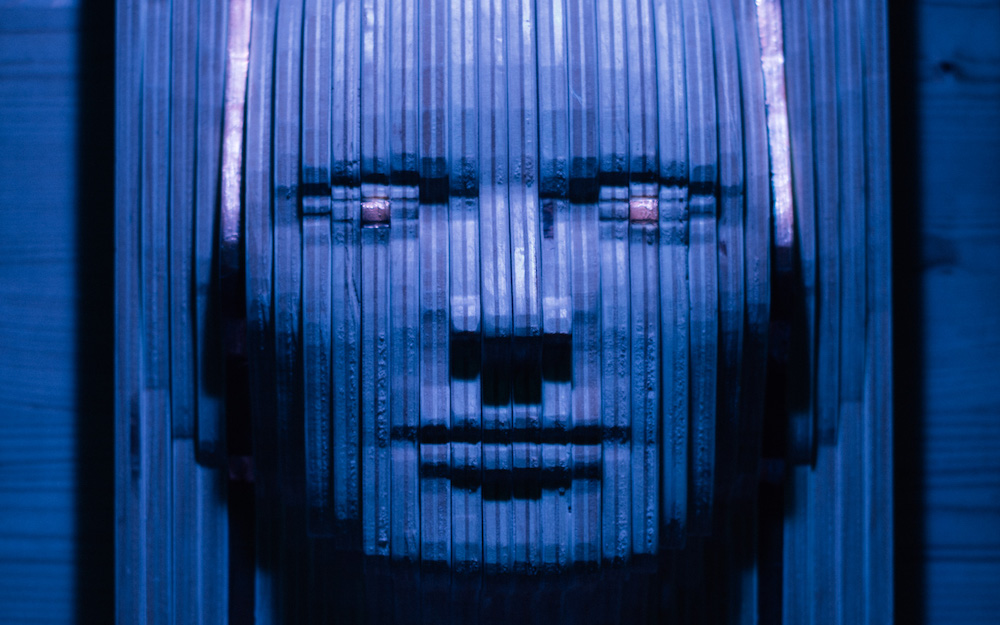 Atmosface is an interactive installation based on capacitive sensing for pseudo-random sound synthesis and generative projections over a layered head sculpture. The user is encouraged to interact with the sensing surfaces, causing changes in the sound environment and in the abstract projections. The artwork requires a dark room as environment, and involves two interactive soundscapes, and one interactive projection. Atmosface is a mirror to look at and interact with; it reminds us that we are looking for answers and meanings about us elsewhere. The concept is based on the pareidolia phenomenon, on how we always try to see something human, or pseudo-human, such as ghosts, monsters or other creatures, when dealing with natural or amorphous patterns.

The psychological phenomenon which makes us perceive a visual or acoustic pattern as something familiar is called pareidolia. The most intriguing aspect of this phenomenon is our disposition in recognizing human-related shapes in natural or amorphous forms. It is probably a little “bug” of our sophisticated perceptual mechanisms, strongly correlated with the anthropocentric view of nature. There are many famous examples of pareidolia. The most common ones include seeing an object or an animal in the clouds, or recognizing a human shape in a landscape. But there are also other cases in which our perception deceives us: from ghosts that appear in old photographs or satanic messages in famous rock songs (sometimes revealed by reverse-listening) to more scientific examples, such as the inkblots in the Rorschach’s test.

The visual cues given by this installation are inspired by The face on Mars, a famous case of pareidolia. In 1976, early pictures of the surface of Mars, taken by the Viking 1 and Viking 2 orbiters, revealed a face on the region of Cydonia. Later observations made clear that the object was a simple rock formation. Atmosface can be seen from the viewpoint of the Space Race, where scientific and paranormal phenomenons are intimately connected in the collective imagination of those years. The aesthetics of this interactive installation is designed to create a subjective environment where pareidolia takes place through acoustic cues. In fact, the sound design is based on randomly-tuned synthesizers: some of them evoke an old Sci-fi soundscape, while others remind of robot-like rattles. Another synthesizer recreates a mechanical vocal-like sound. Two different pairs of speakers play the ambiental and the vocal sounds. The soundscapes are played directly in the room, whereas the vocal-like sounds are produced inside the sculpture, reinforcing the perception that the head is actually speaking. In addition, the installation is augmented by sound-driven abstract projections. The visuals help the user detach from his physical location and fully enter inside the installation. An interactive mechanism, based on capacitive sensing, makes the sculpture “playable” by touch and proximity. Through his hands, the user has the possibility to create virtually unlimited combinations of sounds and colors. In this way, the head becomes an augmented musical instrument. Interactivity has a fundamental role in understanding the paraidolian effect: by exploring Atmosface autonomously, the user will spontaneously try to make sense of what they hear and see. The visitor could then wonder if the face is trying to tell (or sing) something. In the end, this context will leave them alone with their interpretations, exploring and interacting with themselves.

Pictures of the installation 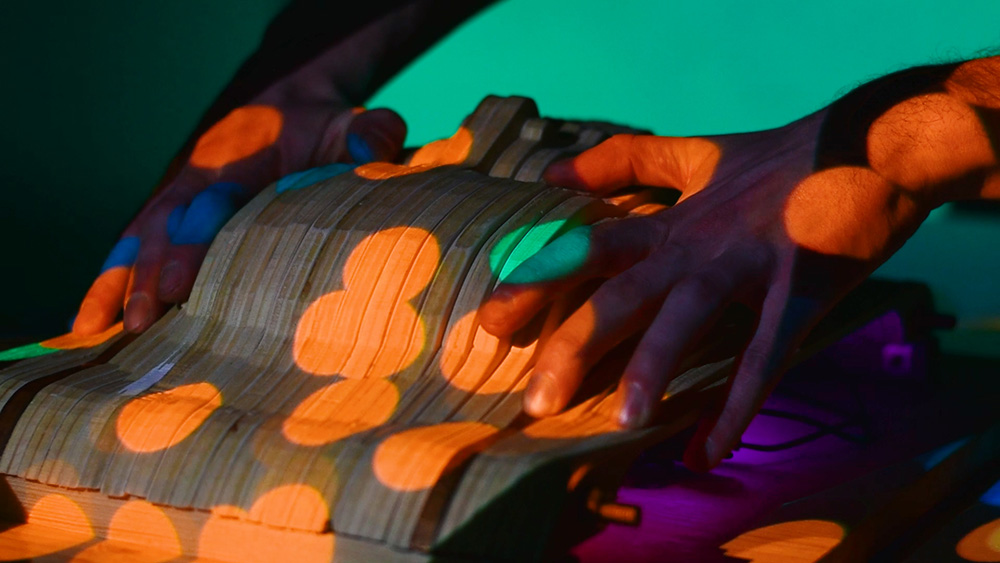 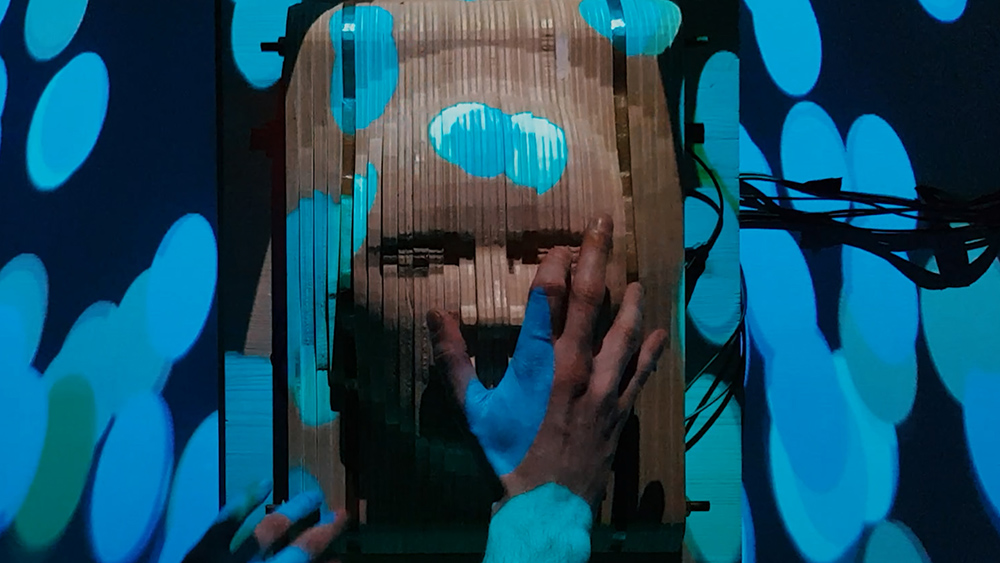 Pictures of the main sculpture in daylight condition 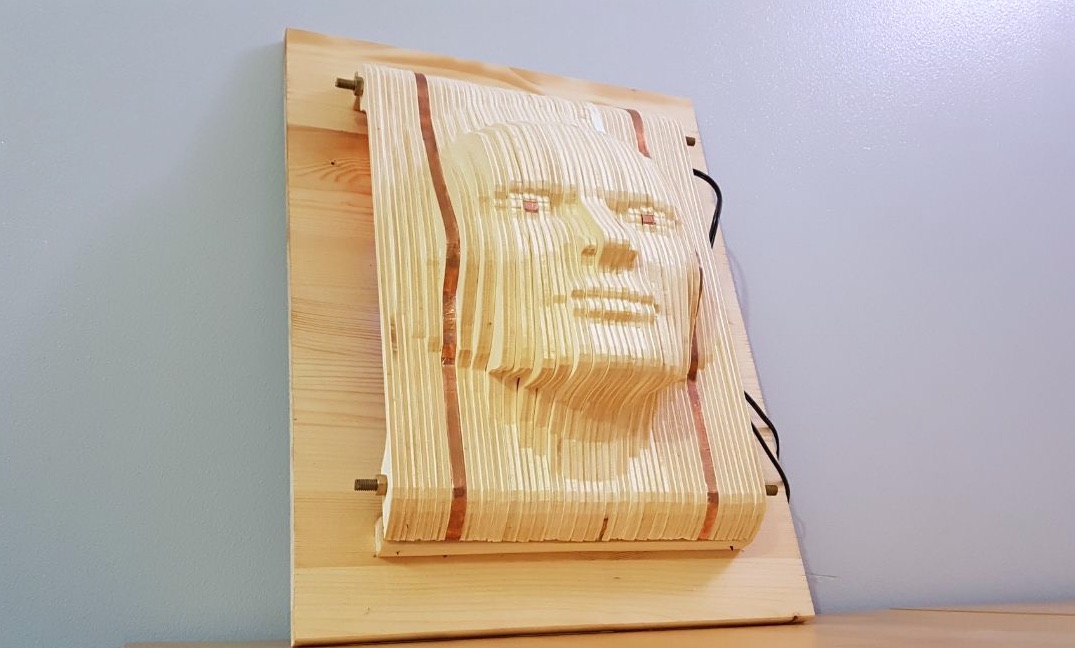 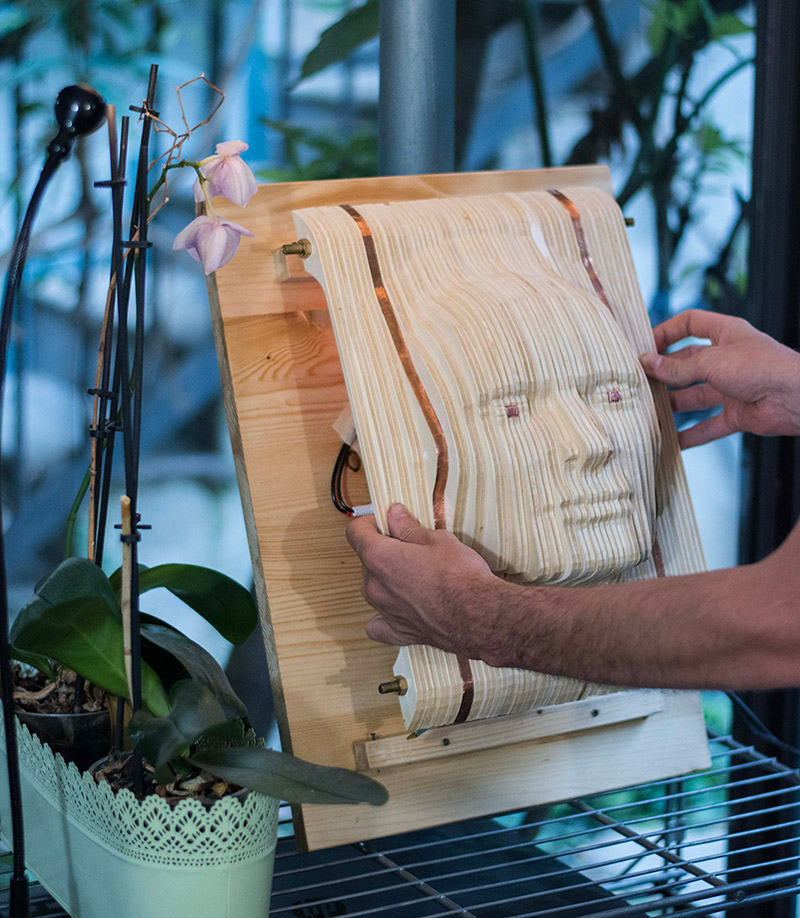